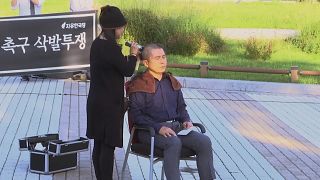 Hwang Kyo-ahn, leader of the Liberty Korea Party, had his head shaved in front of the South Korean Presidential Office on Monday to demand Cho step down.

Hwang also expressed anger towards Moon, who he said was abusing his power by choosing a "criminal" to represent the justice ministry.

Cho was sworn in as Moon administration's second justice minister, despite his alleged involvement in a family corruption scandal.

Cho is accused of using his and his family's influence to get his daughter accepted into an elite university.

The allegation has caused a public outcry in a country where college entrance is a sensitive issue.