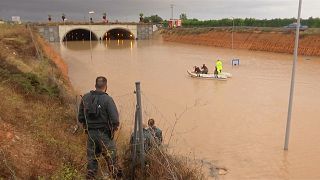 Heavy rainfall in the regions of Valencia and Murcia have been sweeping away cars and debris and forcing the evacuation of hundreds of people, including from submerged highways.

Reuters images showed an overturned van in half-submerged floodwaters on the AP7 motorway, with a man helping in rescue efforts saying he did not know if anybody was inside.

The man who died in the Andalucian city of Almeria on Friday (September 13) had tried to cross a tunnel by car, mayor Ramón Fernández Pacheco said. Two siblings also died on Thursday (September 12) when torrential rain dragged their car.

Although the weather has begun to stabilise, several of the southeastern regions remain on red alert and local water management authorities said rivers like the Segura were still at risk of overflowing in the city of Murcia.

Authorities still recommend that citizens remain at home and avoid using their cars.