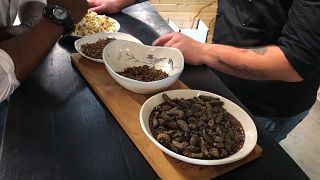 South African chef Mario Barnard said he was "grossed out" and did not entirely enjoy eating grilled scorpions and crunchy insects mixed with garlic and spices on a trip to Thailand four years ago.

But the experience inspired Barnard to start experimenting with insect-based meals and in July he opened a pop-up restaurant in Cape Town's trendy Woodstock suburb that only serves bug meals.

"Insect Experience" is the first restaurant in South Africa to serve insect-only meals, Barnard said, though they have proven increasingly popular in various countries around the world.

Barnard has teamed up with local start-up Gourmet Grubb, who turn black soldier fly larvae into protein powder and milk, which can be used to make insect-based ice cream.

Adventurous customers can try small bowls of insects, including mealworms, as well as larger dried mopane worms, which are already considered a delicacy in some African countries.

Barnard adds that his pop-up restaurant would remain open until November - well beyond the original closure date - after launching in July.

The ravioli is made from a mix of around 50% insect powder and flour, said Barnard, as he waited for a new batch of termites and crickets to arrive.

The United Nations' Food and Agriculture Organization has said insects emit fewer greenhouse gases and less ammonia than cattle or pigs, require much less land and water, and that there are more than 1,900 edible insect species.

Scientists have touted insect-based food as a sustainable and cheap food that is high in protein, fibre and minerals.