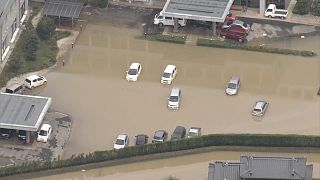 Floods and landslides were predicted by emergency officials in Japan on Thursday after deadly rains slammed western parts of the country and the rain is still falling.

Aerial views show completely submerged neighbourhoods in the town of Omachi in Saga Prefecture. Over 180 people are trapped inside a local hospital, most of them patients. None are injured, but with water seeping into the building they are huddled together on higher floors.

The water is mixed with oil leaking from a nearby factory which has also swept into neighbourhoods and rice paddies.

Saga and Nagasaki prefectures have been hit by twice the usual rainfall for the entire month in just two days. About 670,000 people still remain under evacuation orders in the prefectures and in neighbouring Fukuoka.

Water rescues are underway in residential areas. Emergency teams used rafts to get to people who couldn't evacuate in time. Rescue workers have been inundated with emergency calls from motorists. There have been over 450 reports of vehicles stuck underwater in the region.