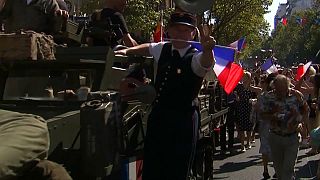 Paris celebrated the 75th anniversary of its victory over the rule of the notorious Nazi leader Adolf Hitler on Sunday (August 25) with a parade in 1940s dress, delighting onlookers who took part in the joyous commemoration.

The parade, which began at Porte d'Orleans and ended at Place Denfert-Rochereau, saw men in Allied uniforms driving in tanks and wartime military vehicles to cheers from the surrounding crowds.

French Resistance fighters, American GIs, and Spanish liberation forces, all of whom played a key role in liberating Paris, were represented.

The liberation of Paris consisted of six days of fighting between French Resistance forces - both military and civilian led by infamous French war hero General Charles de Gaulle - and the German army.

The Germans surrendered on August 25 at the Hotel Meurice in central Paris.

Two million Parisians assembled on the Champs-Elysees the same day for a celebration parade with De Gaulle marching in the forefront.