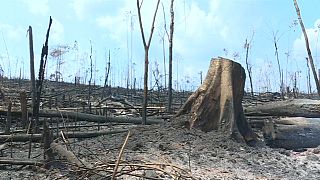 Tree trunk ashes are all that remain in this barren portion of the Amazon rainforest in Brazil's state of Rondonia.

Amid a global chorus of concern and condemnation, Brazil's right-wing President Jair Bolsonaro pledged in an address to the nation to mobilise the army to help combat the blazes, while his administration launched a diplomatic charm offensive to try to mend bridges overseas.

Forest fires in the Brazilian Amazon, which accounts for more than half of the world's largest rainforest, have surged in number by 83% this year, according to government data, destroying vast swathes of a vital bulwark against global climate change.

Environmentalists have warned that his controversial plans for more agriculture and mining in the region will speed up deforestation.

Although fires are a regular and natural occurrence during the dry season at this time of year, environmentalists blamed the jump on farmers clearing land for pasture.

Farmers may have had at least tacit encouragement from the firebrand right-wing president, who took power in January.

Bolsonaro has repeatedly said he believes Brazil should open up the Amazon to business interests, allowing mining, agricultural and logging companies to exploit its natural resources.