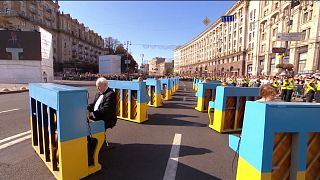 Yellow and blue abound as Ukraine celebrates its independence

Events have been taking place in Kyiv to mark Ukraine's Independence Day.

This year's commemorations did not include a military parade, as is customary, after the intervention of President Volodymyr Zelenskiy.

There was, however, an unofficial march, attended by around 20,000 people, according to AFP news agency.

Around 20,000 people turned out for the unofficial event, which included soldiers, veterans and relatives of those killed at war.

Ukraine declared independence from the Soviet Union on August 24, 1991.