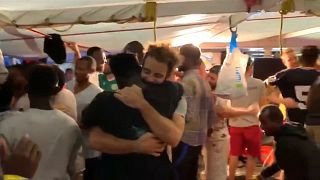 The almost 100 migrants from charity ship Open Arms finally disembarked on the Italian island of Lampedusa after nearly three weeks at sea.

They were seen hugging the crew goodbye as they finally left the ship, capping a drama that saw 15 people jump overboard in a desperate bid to escape deteriorating conditions on the vessel and Spain dispatch a naval ship to try to resolve the crisis.

A Sicilian prosecutor boarded the ship and met port authorities as part of an investigation into possible kidnapping charges resulting from the refusal of hard-line Interior Minister Matteo Salvini to allow the migrants to get off the vessel.

Salvini refused to open Italian ports, even after six countries stepped forward to take the migrants and despite a fissure in Italy's imploding governing coalition, that expanded in recent days to include his handling of the crisis.