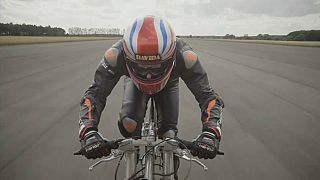 Neil Campbell undertook the effort on a custom-built bike, which was pulled to speed by a Porsche Cayenne before being released, allowing the cyclist to break the record on his own steam.

The record attempt over a distance of 656 feet (200 metres) on a runway at Elvington Airfield in Yorkshire was monitored by independent adjudicators and timekeepers.

Campbell, an architect by day, is no stranger to setting records - he broke his own European motor-paced record last year, clocking a speed of 149 mph (239.8 km per hour).