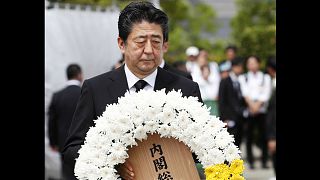 Hundreds of people attended a ceremony at Nagasaki Peace Park on Friday (August 9) where the city's mayor called on Japan to commit to ridding the world of nuclear weapons, 74 years after the city was struck by an atomic bomb.

It exploded around 500 meters above the ground, instantly killing about 27,000 and about 70,000 by the end of the year. The bombing of Nagasaki came three days after another on Hiroshima.

Nagasaki Mayor Tomihisa Taue said Japan had a responsibility to sign a nuclear treaty ban and maintain a "philosophy of peace" within the nation's constitution.

Japanese Prime Minister Shinzo Abe, who also attended the ceremony, said he would "actively work with other countries" for nuclear disarmament.