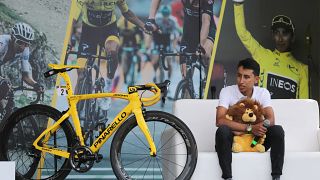 Cyclist Egan Bernal, the first Latin American to win the Tour de France, got a hero's welcome from thousands of fans in his hometown of Zipaquira, Colombia, on Wednesday.

A group of some 3,000 supporters dressed in the same colour chanted his name and cheered as he walked on stage.

At 22 years old, Bernal is the youngest rider to win the race in 110 years. He promised a cheering crowd in the main square of the small Andean city that he would pursue further triumphs.

"This is like a drug, you win one and you want more and more," he said.

He was crowned Tour winner in July after retaining the overall leader's yellow jersey during the 21st and final stage, beating teammate and defending champion Geraint Thomas of Britain by one minute 11 seconds.