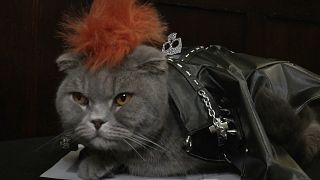 It was a literal catwalk in the lobby of the Algonquin Hotel in New York Thursday (August 1) as the legendary scene was filled with feline fashionistas.

The year's theme was, "It's a Small World." The cats represented countries including Ireland, Spain, the United Kingdom and of course, the United States.

All the proceeds of the event went to the Mayors Alliance for New York City Animals, which helps find homes for stray cats and dogs.

The hotel is known for its onetime Round Table that was a meeting place for famous authors and actors including Dorothy Parker, Noel Coward and Harpo Marx.

The Algonquin Hotel also has a connection to adopted felines, as it has provided a home for a succession of 12 stray cats since the 1930s when then hotel general manager Frank Case brought in a hungry stray named 'Billy'. The lobby is now home to 'Hamlet,' who has lived there since July of 2017.