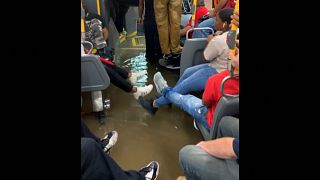 Footage has emerged of floodwaters engulfing the floor of a New York bus.

This footage you can watch in the main header was shared by Lacy Shelby, who said she filmed it on the S40 bus in Richmond Terrace, Staten Island, at around 4:20 p.m. on Wednesday.

Shelby said on Twitter that the flooding was concentrated to a four-block stretch along Richmond Terrace. There were other areas experiencing flooding, but this particular stretch was among the worst. There were also reports of street flooding in the Bulls Head section of Staten Island, with water reaching car floorboards.

When asked about the incident, the MTA (Metropolitan Transportation Authority) called it a graphic example of the challenges our bus operators face on the road day in and day out as they work hard to get millions of New Yorkers to their destinations safely and expeditiously.

No injuries were reported, and the bus did finish its route, according to an MTA spokesman. The agency said it was looking into the incident, making sure all safety protocols were followed.

As storms moved through the area, flooded roads caused the water to seep through the bus doors and down the aisle.

The bus driver was unable to make several stops due to flooded roads.

Local media reported that a flash flood warning had been issued for Staten Island on Wednesday afternoon due to the expected heavy storm.