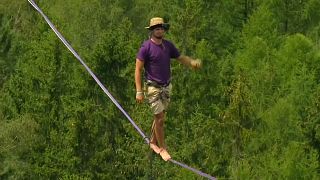 Thrill-seekers balanced and walked mid-air on lines tied between rock formations in the north of the Czech Republic on Saturday (July 20) as others practised lower to the ground nearby.

They were attending a 'slackline festival' where more than 200 people from more than 40 countries came together to walk to and fro — and occasionally jump up and down — on the lines, which are only 2.5 cm (1 inch) wide.

Dlaloc Montezuma, a 21-year-old participant from Mexico, said he had never done any other kind of sport but that he enjoyed slacklining because he liked "being a monkey".

Twenty-nine-year-old Andrea Datolli, also from Mexico, said that being on the slacklines was a unique feeling, in which she was aware of her whole body and her mind was focused on the present moment.

Similar to tightrope walking, slacklining involves walking on a strap suspended in the air and tied between two anchor points.

When it is done between two cliffs over a long drop it is called highlining.