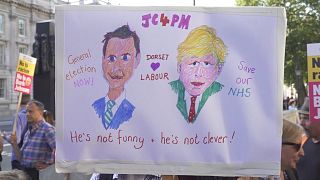 Boris Johnson will replace Theresa May as UK prime minister after winning the leadership of the Conservative Party on Tuesday (July 23).

The protest was organised by the left-wing group the People's Assembly and speakers included activist and journalist Owen Jones and Labour Shadow Home Secretary Diane Abbott.

Abbott said Johnson's thinking about race would set the country back decades.

Jones said Johnson's comments in the past had offended black and Muslim people as well as LGBT people.