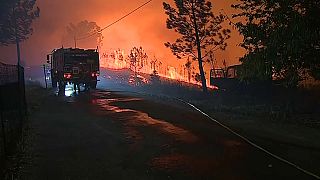 At least eight people have been injured, one seriously, a civilian apparently suffering 1st and 2nd-degree burns. The civilian has been airlifted to hospital in Lisbon.

Today, Sunday, the situation was still “far from under control”, said early reports.

Last night, the word coming out of Vila de Rei – where the first blaze started – was that this fire was ‘uncontrollable’.

Over 800 firefighters are on the ground, backed by 250 appliances and 8 planes and helicopters.

For now, no homes appear to be ‘at risk’, though inhabitants of numerous villages have been battling through the night to keep their communities safe.

The other two fires in Sertã, have already been mastered

As to the causes of these fires which now straddle two districts, they were almost certainly ‘manmade’, in that they started within 20 minutes of each other