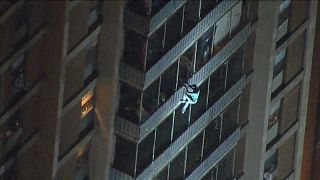 Video shows man climb down building during fire in Philadelphia

Footage from a television station's helicopter has captured a man climbing down a tall building during a fire.

Local media reported the blaze had injured four residents and three policemen. The authorities said the injuries were the result of smoke inhalation and heat stress.

Firefighters found light smoke on all of the building's 19 floors, local media reported.