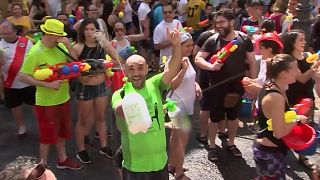 Residents in Madrid gave one another a good soaking during the Vallecas annual water festival on Sunday (14 July 2019).

The Battle of the Water, as it is popularly known, sees residents of the Vallecas neighbourhood dance through the streets to a drum as they spray each other with water guns.

Many participants dress as pirates, as the festival dates back to an ironic demand by locals for Vallecas — which lies over 350 kilometres (217 miles) from the Mediterranean Sea — to become a port.

It gave residents a chance to cool off in the sweltering heat which reached up to 40 degrees Celsius (104 degrees Fahrenheit) over the weekend.

The festival is now in its 38th year.