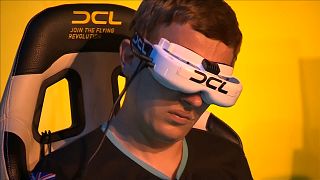 Apex Racing beat XBlades Running of Britain on Saturday, July 13, to win the Turin leg of the Drone Champions League.

Eight teams started the competition on Friday, July 12, before it was whittled down to the last two in the grand finale.

Thousands of people watched on as the drones, which accelerate from 0-100 kilometres per hour in 1.6 seconds, flew around the course at a top speed of 160kph.

After two rounds of the 2019 Drone Champions League XBlades Racing remain top of the standings on 840 points with APEX Racing moving up to second place on 660 points.

The next round of the Drone Champions League will take place in Saudi Arabia from September 12-13.