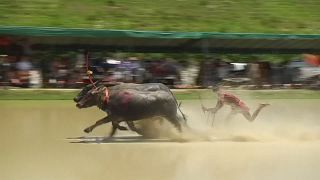 Farmers in eastern Thailand celebrated the start of the sowing season on Saturday by racing the buffaloes whose usual duty is to plough the fields.

The event took place in Chonburi, about 60 kilometres south-east of the capital, Bangkok.

The race, officially known as the Wooden Plow Buffalo Race, is held once a year to express gratitude to the buffaloes after working for farmers all year long.

The buffaloes are harnessed as they normally are for work, two abreast, trailing a plough, or harrow, meant to break up soil for the planting of seeds, with farmers walking behind to guide the operation.

But for Saturday's race, the farmers-turned-jockeys coaxed and whipped the animals to make them run as fast as possible to the finish line 200 metres away.

As the referee blew a whistle signalling the start of the race, the sound of the cheering crowd competed with the sloshing and splashing of the buffalo teams racing through a wet rice field, with the "jockeys" running to keep pace with their animals.

The buffaloes race for several rounds before the winners of each category go up against each other for the final prize of the day - a golden cup with 3,000 baht cash.