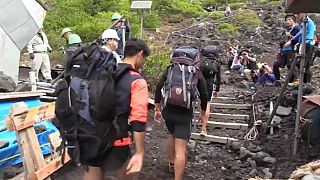 Three major trails on Mount Fuji that start in Shizuoka Prefecture have opened to trekkers for the summer climbing season.

At the Fujisanhongu Sengentaisha shrine down the mountain, a Shinto ritual was held to mark the opening of one of the trails. People offered spring water from the foot of Mount Fuji while praying for trekkers' safety.

The opening of the Fujinomiya-guchi, Gotenba-guchi and Subashiri-guchi trails followed those of other routes in Yamanashi Prefecture this month. Mount Fuji straddles the two prefectures.

The trails had been closed since last September due to severe winter weather.

On Fujinomiya-guchi, hikers from Japan and abroad began their ascents after officials removed a no-entry sign Wednesday morning, despite thick fog covering the summit.

Hikers asked workers at a hut to put a commemorative brand on their wooden trekking poles.