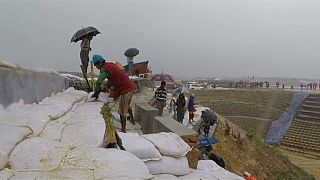 Thousands of people have been displaced within the Rohingya refugee camp of Cox's Bazar in Bangladesh over the last few days after heavy monsoon rains started last Thursday (July 4) causing flooding and landslides.

Thousands of the Rohingya refugees are working at securing the hills which surround their camp, using stabilising terraces made of filled cement piping and sandbags to try and secure the slopes from further landslides.

Nearly 700,000 Rohingya Muslims have fled across the border from Myanmar since August 2017 when the Myanmar military launched a violent crackdown in Northern Rakhine State.