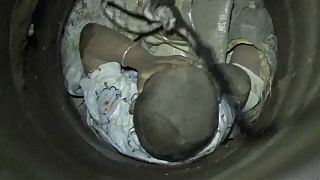 The child stumbled into the deep and narrow well, which was only covered by a plastic cloth in an open field, at around 5.40 pm while playing with his grandmother.

The cavity was only around 40cm in diameter and very deep, making it almost impossible for anyone to go down and bring the boy up.

Five excavators were brought in immediately to dig up the surrounding area to allow for rescuers to remove parts of the cement tubes.

After two hours of digging, rescuers managed to remove four of the 1.2-metre tubes.

A firefighter with ropes tied around him went head first down the well and pulled the child out with the help of other rescuers.

The boy was sent to a local hospital immediately. He is in good health with no obvious traumatic injuries.