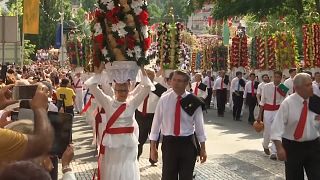 More than 700 women carrying heavy-flower-decorated trays took part in the traditional Trays Festival around the historic town of Tomar.

The parade only happens every four years and attracts hundreds of thousands of visitors.

This year a total of 748 trays were part of the parade that spanned across around 5 kilometres of the Portuguese city,

The trays are a tribute to the Holy Spirit in Christianity, with the women carrying a bread offering on their heads in a structure that weighs around 16 kilos (35.2 lbs).

Women from all walks of life take part in the family tradition, but they are not completely alone, as the parade is traditionally in pairs.

But the men are only expected to step in to help the tray-carrier, and only if an accident happens at some point and a woman needs assistance in carrying the tray.

The tradition dates back to the 16th century.