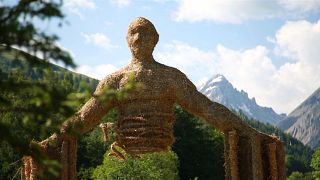 Hay and straw, a challenge for sculptors at contest in French Alps