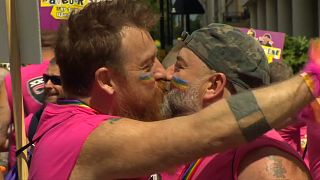 The streets of London were packed with thousands of people celebrating Pride on Saturday (July 7).

Mayor Sadiq Khan who helped launch the 2019 parade, said that the event offered a chance for London to ''celebrate our diversity'' and had hoped this year would be the biggest Pride the city had seen. This year's parade marks the 50th commemoration of the Stonewall uprising that triggered the modern LGBTQ movement.

In Budapest, for the first time, the Gay Pride parade was held without participants being fenced off.