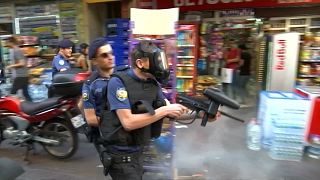 LGBTI+ Pride Week, the organisers of the march, said they had come to an agreement with the police to allow them to read a public statement and later disperse peacefully, but slammed the ban.

Istanbul has traditionally been seen as a relative safe haven by members of the gay community from elsewhere in the region, but although homosexuality is not a crime in Turkey, there is widespread hostility to it across Turkish society.

A wildfire rages in the Serra da Estrela natural park, a mountainous region in central Portugal designated by Unesco.