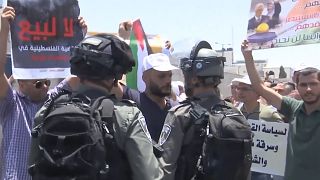 Hundreds of Palestinian protesters in various West Bank locations on Tuesday rallied against this week's economic conference in Bahrain that will kick off the Trump administration's plan for peace in the Middle East.

One protester in Bethlehem brought a white donkey with an image of Saudi Crown Prince Mohammad Bin Salman attached to its back, including a message in Arabic reading: "Shame on the participants of Bahrain's traitorous conference."

A day earlier, protesters poured into the streets of many West Bank cities, from Hebron to Nablus, some burning effigies of US President Donald Trump and Bahrain's king.

The Palestinian Authority has rejected the US peace proposal and is boycotting the workshop in Bahrain, where the Trump administration's Mideast peace team hopes to drum up regional support and secure financial pledges from Arab and Israeli stakeholders.