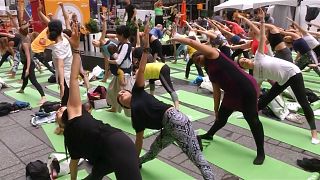 "When it started raining very, very hard, the numbers did diminish but about half the people stayed and it was really beautiful and it was a metaphor for how we keep going even when things don't go exactly as we'd hoped, when there are surprises or when the sun doesn't shine on us every day," said Tim Tompkins, president of Times Square Alliance and co-founder of the event.

Wendy Joseph didn't let the rain bother her either.

"I think it's fabulous," she said. "I had a great time. This is my first time doing this event. And it's just, you know, you feel the energy and the flow and remember, we're part of nature, so it all makes sense."

In 2014, the United Nations declared June 21 as the International Day of Yoga after adopting a measure proposed by Indian Prime Minister Narendra Modi. The day is marked by the mass practice of yoga and other healthy activities around the world.