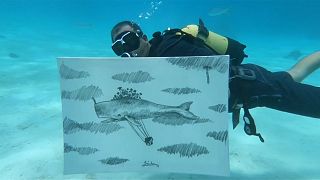 Sandor Gonzalez gets fully kitted out in diving gear, grabs a canvas that he has given a special waterproof veneer, and swims out sixty metres to his easel fixed in the seabed around six metres below the surface.

The artist said he does not plan beforehand, instead of allowing inspiration to strike as he enters a meditative state underwater, where sounds are muffled and the light ripples.

Punta Perdiz is a diving and snorkelling spot on Cuba's southern coast, some 172 km from Havana, popular with tourists for its crystalline, calm water and coral reef close to the shore.

Gonzalez exhibits some of his work at a gallery above water in Punta Perdiz and is hoping to further develop the project.

Already he and other artists are exhibiting some artworks, such as decorated plant pots, on the seabed in what they are calling a "submarine art gallery".