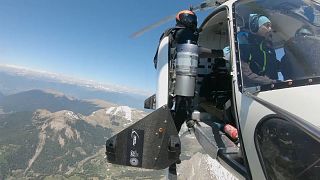 The Jetman soars over the Dolomites

The Jetman, also known as Vince Reffet, flew through the Dolomites mountain range in a death-defying stunt on Saturday.

The 35-year-old is a French pilot and the world's second Jetman after Swiss inventor Yves Rossy.

The world-first 2.4 metre wingspan and onboard reactors allow him to reach speeds of 400 kilometres per hour.