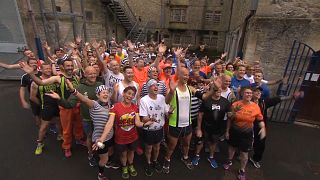 Convicts quick on their feet in world's first ever prison marathon

Michael Burke broke free from the chasing pack, to win the first ever Prison Marathon on Sunday.

Aptly named 'The Green Mile', Shepton Mallet Prison - which was the oldest working prison in the UK up until it was closed in March 2013 - provided the venue for the race.

Runners passed through 'A' wing and 'B' wing, upstairs, along prison corridors and through exercise yards with each of the 78 laps including 70 steps - a total of nearly 5500 per competitor.

Burke proved himself to be a capable escapee, negotiating the gruelling course in just four hours and 13 minutes.

Simon Staple and Mark Pike were second and third respectively.