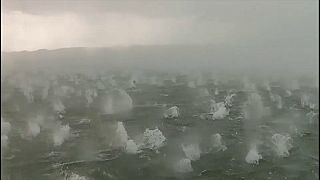 This video, posted by a passenger on Lake Ammersee, shows the hail storm that hit the lake on Monday afternoon.

According to the Bavarian police, several people, including a seven-year-old boy, were injured. The houses were flooded due to heavy rains and were damaged by hail that meteorologists described as about five centimetres (almost 2 inches) in size.

However, some witnesses reported that the size of tennis balls (more than 6.5 centimetres) hit cars on a federal highway in Bavaria, breaking car windows and side mirrors.