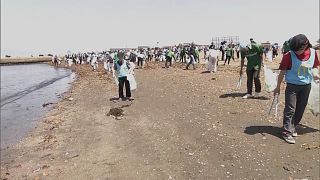 Japan beach clean-up aims to reduce plastic in our oceans

A beach clean-up campaign has been launched in Japan to tackle plastic pollution in the sea.

The week-long programme kicked off on Thursday.

The environment ministry and the Nippon Foundation are organising the first national campaign of its kind in Japan.

Environment minister Yoshiaki Harada joined about 400 people cleaning a beach in the city of Fujisawa, near Tokyo.

Harada said he hopes the participants will reconsider the use of plastic in their lives.

The volunteers walked along the beach, picking up plastic bottles and packages, as well as cans and broken glass.

The campaign will run until June 8, which the United Nations has designated as World Oceans Day.

About 800,000 people are expected to take part in the campaign at 2,000 locations across Japan.