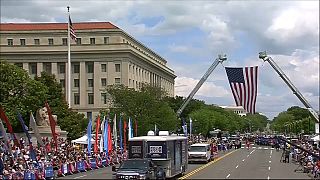 The National Memorial Day Parade was held in Washington Monday. It's the fifteenth year for the event and is said to be the nation's largest memorial day parade.

Thousands of spectators came to the National Mall to pay tribute to the military men and women who gave their lives in service to their country.

The event is sponsored by the American Veterans Center and pays tribute to American fallen heroes from the Revolutionary War to the present day.