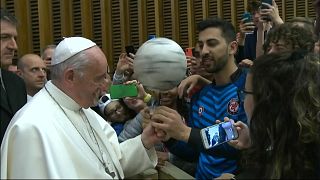 A Vatican hall was turned into a stadium on Friday (May 24) as thousands of soccer lovers met Pope Francis.

A Vatican hall was turned into a stadium on Friday (May 24) as thousands of soccer lovers met Pope Francis.

More than 5,000 children attended the event, called "Soccer We Love", in the presence of the pope, who impressed everyone with his ball twirling skills.

During the meeting — attended by soccer players, coaches and former champions — the Pontiff underlined the meaning of sports for children.

"Behind a rolling ball there is often a boy with his dreams and his aspirations", he said. "Sports does not only involve the muscles of a boy but the whole personality in all its dimensions, even the deepest ones."

The leader of the world's 1.2 billion Catholics urged parents to teach children the values of soccer, even if they will not become champions.

Pope Francis also took the opportunity to ask some former football stars who took part in the event- such as Samuel Eto'o, Javier Zanetti and Clarence Seedorf - to be an example for children.