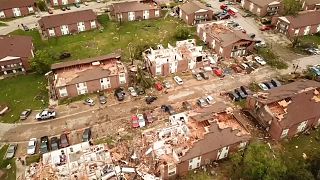 Roofs fly off as tornadoes tear across Jefferson City

An outbreak of storms spawned tornadoes that flattened homes, tossed cars across a dealership lot and injured dozens of people in Missouri's capital city.

It killed at least three others elsewhere in the state.

Residents in Jefferson City began cleaning up debris as the day passed on Wednesday after a large and destructive twister moved over the city shortly before midnight.

The tornado cut a path about three miles long and a mile wide from the south end of Jefferson City north toward the Missouri River, said police Lt. David Williams.

Emergency workers reported about two dozen injuries, Williams said, and around 100 of people were in shelters.

Hospitals reported treating injuries such as cuts and bruises.

There were no immediate reports of any deaths or missing people in the capital city of about 40,000, but door-to-door checks were being done Thursday.

Many in Jefferson City considered themselves fortunate to survive.