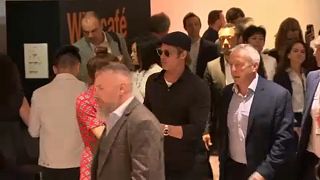 Leonardo DiCaprio, Brad Pitt and Margot Robbie were greeted by cheering fans as they arrived with director Quentin Tarantino at a news conference to publicize his new film in Cannes.

"Once Upon a Time... in Hollywood", one of the most hotly anticipated premieres at this year's film festival, was screened on Tuesday, receiving a standing ovation at the end and praise from many critics.

His new movie centres on Ricky Dalton, a TV actor wracked by self-doubt played by DiCaprio.

It is a love letter to the world of cinema, from its glamorous parties to the highs and lows of being on set.