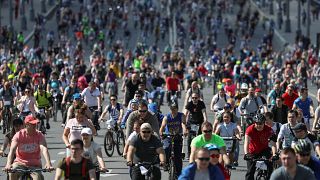 A record 40,000 enthusiasts took part in the Moscow bicycle festival on Sunday (May 19) and raced around the centre of the Russian capital.

The festival started with a competition between semi-professional cyclists from various countries including Germany, Spain, UAE and others.