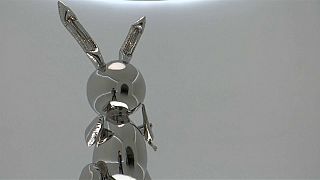 A 1986 sculpture titled "Rabbit" by American pop artist Jeff Koons sold for $91.1 million (around €81.4 million) in New York on Wednesday.

The stainless steel, 104-cm-high rabbit, regarded as one of the most celebrated works of 20th-century art, sold for over $20 million (around €17.88 million) above its pre-sale estimate.

Christie's said the sale meant Koons' sculpture was the most expensive work by a living artist ever to sell at auction, overtaking the $90.3 million (around €80.72 million) figure set last November by British painter David Hockney's 1972 work "Portrait of an Artist (Pool With Two Figures)".

The identity of the "Rabbit" buyer was not disclosed.