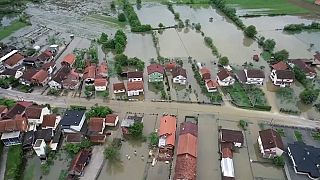 Aerial drone footage shows flooded neighbourhoods in Sanski Most, while in Matuzici, residents were struggling with flooded homes and streets.

Bosnian media reported that rescuers are searching for a 6-year-old boy who fell into a swollen stream near his home in the central Bosnian village of Begov Han.

Several local authorities in northern and central Bosnia introduced emergency measures on Tuesday to battle the floods and urged residents living close to rivers to evacuate their homes.

Some schools have cancelled classes, while electricity and water supplies have been disrupted.

The rainfall has also caused landslides, closing down local roads and damaging bridges.