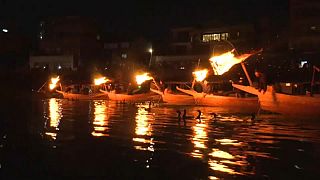 Tourists gathered at the Nagara River in central Japan on Saturday to witness the season's opening of traditional fishing using trained waterfowl.

Fishermen in the city of Gifu use cormorants to catch sweetfish in a tradition dating back more than 1,300 years.

On Saturday night, fishing masters in traditional attire boarded their torch-lit boats. They skillfully guided the birds on rope leashes to catch fish.

At the climax of the event, six boats lined up side-by-side and hauled in fish by driving them into the shallows.

Spectators who viewed the performance from boats applauded and took photos.

Cormorant fishing on the Nagara River will continue through October 15. City officials expect the event to draw 115,000 visitors during the season.