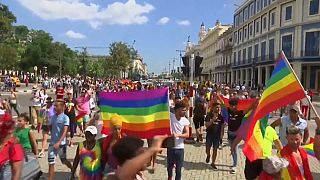 Gay rights activists organised an unauthorised march in one of Havana's main thoroughfares before they were stopped by police.

The march on Saturday afternoon was the second by a non-governmental organisation in Cuba in slightly more than a month.

A handful of marchers were arrested when they attempted to push through a massive police presence and continue from the Prado Boulevard onto the Malecon, the capital's famous seaside promenade.

The march was organised largely using Cuba's new mobile internet, with gay-rights activists and groups of friends calling for a march over Facebook and WhatsApp after the government-run gay rights organisation cancelled their own march.