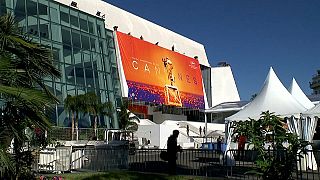 The official poster for the 72nd Cannes Film Festival was unveiled outside the Palais des Festivals early Sunday morning (May 12).

The poster pays tribute to late director Agnes Varda, featuring an action shot of the filmmaker taken while she made "La Pointe Courte", her first feature film in 1955.

The 72nd Cannes Film Festival, running from May 14 to 25, is due to kick off on Tuesday (May 14) with Jim Jarmusch's latest film, zombie extravaganza "The Dead Don't Die".