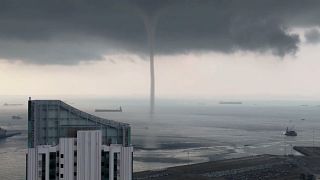 A massive waterspout surprised Singapore on Saturday (May 11) morning.

Witnesses posted images on social media showing the waterspout swirling near the southern shore of the island.

They told local media the waterspout was seen for around 20 minutes.

Local media quoted the National Environment Agency (NEA) as saying there were an average of three waterspout occurrences every year.