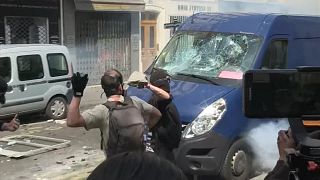 Scuffles between police and protesters broke out in Paris on Wednesday as thousands of people gathered for May Day rallies under tight security.

Protesters were seen throwing stones and firebombs towards the police and smashing the windshield of a parked van.

French authorities announced tight security measures for May Day demonstrations, with the interior minister saying there was a risk that "radical activists" could join anti-government "gilets jaunes" ("yellow vest") protesters and union workers in the streets of Paris and across the country.

More than 7,400 police were expected to be deployed, aided by drones to give them an overview of the protests and a quicker way to head off potential violence.

French police said it had made 165 arrests by early afternoon and had conducted more than 9,000 searches.