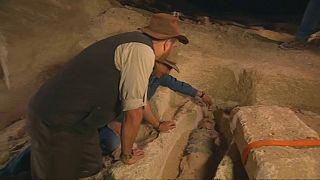 Egypt unveils the 2,500-year-old mummy of a high priest

Egyptologist Zahi Hawass and an Egyptian team have opened three sealed sarcophagi from the 26th Dynasty.

One contained the well-preserved mummy of a powerful priest, wrapped in linen and decorated with a golden figure depicting Isis, an ancient Egyptian goddess.

The team also opened two other sarcophagi, one containing a female mummy decorated with blue beads and another with a father in a family tomb. At the burial site in Minya province, the team also found a rare wax head.

Egyptian archaeologists discovered the site a year and a half ago and the excavation is continuing.

In 1927, a huge limestone sarcophagus was found in the area and placed in the Egyptian Museum in Cairo, but the site was then forgotten.

But two years ago an unauthorised digger was found at the site and stopped. That's what alerted archaeologists and excavation began.