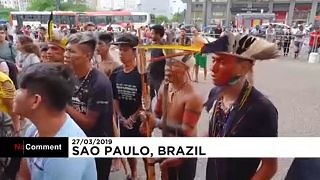 Indigenous groups across Brazil protested Wednesday against a proposal to transfer Indigenous health services from the federal government to municipalities.

Hundreds of demonstrators in traditional garb and body paint danced and prayed at a protest in Sao Paulo city hall.

In the morning, a group entered the building and was pepper-sprayed, according to a community leader.

In a live-streamed video posted to Facebook, a group lined up and banged staffs in unison in front of a line of civil guard police who stood with shields in the city government's entryway.

They did a ritual dance in the entryway before going back outside after negotiating with police.