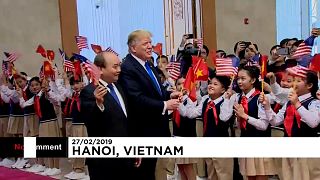 Hanoi residents swept up in excitement of Trump-Kim summit

Vietnamese people have been caught up in the excitement of the summit between US President Donald Trump and North Korean leader Kim Jong-un and were out and about on Wednesday hoping for a glimpse of the two leaders.

A Hanoi resident said he took a day off to see Trump and finally caught the US president's motorcade passing by.

An artist was seen displaying his painting of Trump and Kim in front of JW Marriott hotel, the accommodation of the US president.

Trump and Kim met on Wednesday for their second summit, betting their personal relationship can break a stalemate over the North's nuclear weapons and end more than 70 years of hostility.

Despite little progress towards his stated goal of ridding North Korea of its nuclear weapons since first meeting Kim in Singapore last year, Trump has said he is fully committed to his personal diplomacy with Kim.