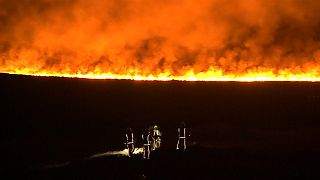 "I think this is possibly one of the biggest fires I've seen in West Yorkshire for a wildfire and because it's running through heather, it really does have a high flame front because it's so combustible," said station commander Laura Boocock.

"It's really quite dramatic to see but it's nothing we can't deal with."